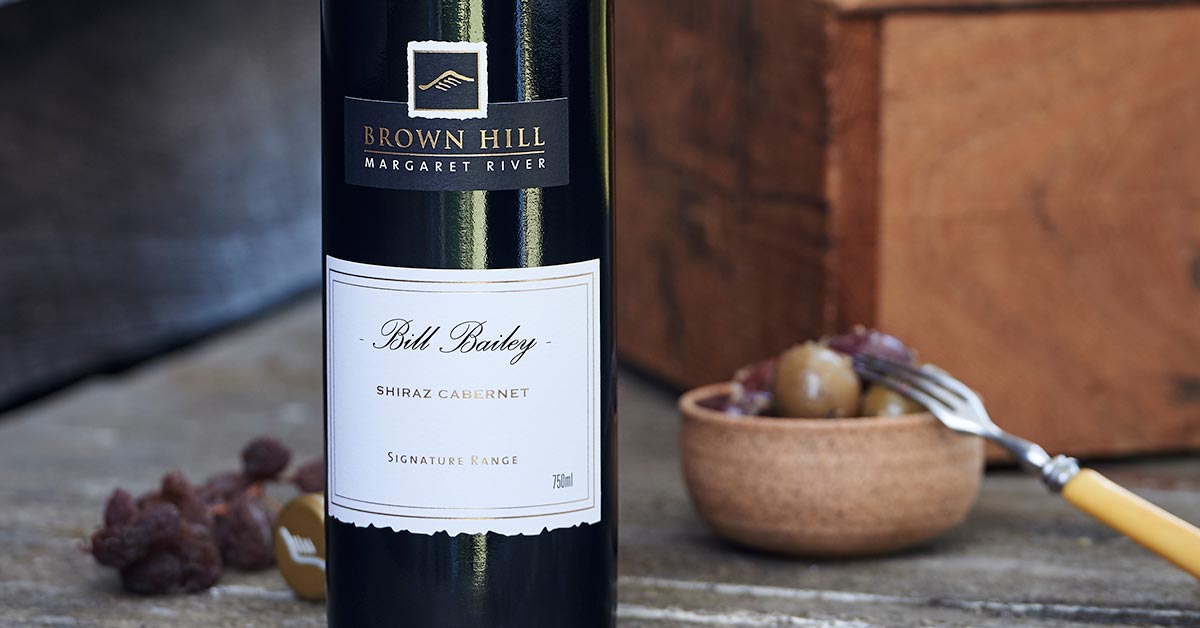 In the North East of Italy in the Veneto region, vintners follow an ancient formula in which wine is made from drying raisins on straw mats. This wine is known as Amarone. With its higher concentration and alcohol level, silky Amarone is one of Italy’s most distinctive wines. Learn more about this Italian style of wine in this article from Wine Folly.

The Bill Bailey is grown and made in much the same way as this Amarone style. The grapes are picked four to six weeks later than the other varieties, so the berries are mainly raisins. The result is a very ripe, raisiny, full-bodied wine with soft acid and signature characters of big, rich, intense flavours.

Like Brown Hill’s Great Boulder red, which also sits in the Signature range of wines, the Bill Bailey is a non-traditional blend for Margaret River, being a 50/50 mix of Cabernet and Shiraz.

The 2013 vintage won the trophy in Ray Jordan’s West Australian Wine Guide for Best of the West in its category. This wine now has four years of age up its sleeve and has started to settle down. What stands out is the silkiness. The Cabernet adds structure and the Shiraz, along with the Amarone growing style, adds lusciousness. The nose has aromas of black pepper, mulberry jam, juniper, blackberry and a whiff of eucalyptus. The palate tastes of cassis, vanilla, jam and loganberries.

The 2014 vintage scored 91 points from James Halliday and the 2016 received 96 points from Ray Jordan and Runner Up Best Red Blend in the WA Wine Guide 2019. The 2018 vintage was superb and received Silver from The Real Review and also 96 points Ray Jordan WA Wine Companion 2021.

The 2019 Bill Bailey is looking just as compelling – try it for yourself. The 2019 vintage in Margaret River was milder than an average summer. The select area of our family vineyard planted to 50/50 Shiraz and Cabernet for our Bill Bailey was handpicked late in the season. Both varieties are co-fermented and blended together to make a well integrated and harmonious wine.

We only make this signature wine in the best years and the 2019 vintage is an exquisite wine, displaying stunning concentrated fruit flavours. There are notes of mulberry, plums and dark chocolate on the nose. The palate is complex and layered with a beautiful blend of raspberry, blueberry and spice

It’s hard to resist drinking it now but it will most certainly age beautifully over the next 10-15 years. I’d really like you to discover first hand why this is my favourite wine to make.